Kenny Tanemura's single-poem chap, MAO'S PEARS, came out in 2011.  I read it then and have been unable to forget it. It is, among other things, one of the best long poems I've read and experienced.  It makes sense that its existence has haunted me over the years.  Here's how it begins, the first stanza:

"If you want to know
the taste
of a pear, you must
change the pear
by eating it yourself," Mao said,

So right there is the call for engagement--a lesson that continues to be timely in today's recent controversies about the OTHER, race or otherwise.  The poem continues:

meaning you must,
by biting
into the fruit, enter the conversation
of a pear, and convince it
to change its pear-mind,

or at least alter it in
some way--
perhaps an inclination
or a way of decorating
a home could be improved.

You can't really know
a pear
or anything, for that matter--
an eel, green peas, wafers, tomatoes
--unless you change it,

because letting these things
stay
what they already are,
untainted by our knowledge,
keeps us in a state of

The notion, as a general concept, goes against another seemingly admirable idea of being able to see someone or something the way that someone/something is -- that they exist or have properties not dependent on you seeing them:

Of course a lot can be explained by the poem's particular context: Mao, a revolution, his times:

And Mao said, “If you
want to know
the theory and methods
of revolution
you must take part in the revolution.”

But taking the matter beyond Mao -- to, say, pears which is a  metaphor (perhaps) for a more general human condition and why this poem has lingered -- there are no definitive or general (even a revolution?) answers for how one may engage with the world.

Mao trusted the coyote and wound up
on a country road. A random fiesta
with trumpets came out of the woods.

What did it mean? Some kind of redemption
or pointless excavation? They said
Mao was a penitent type, but he saw me
trying to put down my brush.

Never (or so I’m tempted to claim) has delicacy been so palpable as the poems that make up Matthew Thorburn’s chap collection, A Green River in Spring. The author says “the first spark” for many of the poems came from reading classical Chinese and Japanese poetry. Thorburn retains much of what’s wonderful about the sources—imagery, the link to nature, the meticulous placement of words, a deftness, among others.  Just witness (in addition to reading) this chap’s first poem with a finely-wrought but nonetheless killer ending:

The sun breaks like an egg over everything
east of here. Stop stop, enough, enough,
the sparrows say—or that’s what Lao Wen says

they say in Chinese. Take your tarnished
born, your wooden flute and break
this silence—alone beside the dark water, desperate

for the birds to get to work—delicate
as the last skin of ice on a winter river’s wrist.

There’s much to enjoy in this slim collection. The evocative poems resonate and linger long after they’ve been read. And, upon slipping from memory, at times, the poems return to haunt again, poems that

… just come back
like your gray cat—
scooching across the floor
inch by inch all afternoon
to stay inside this
yellow square of light.

I looked in a book for an answer but it was upside down.

From that opening, the rest of the text (narrative) sketched as fragments, as moments, on each page offers a haunting, a grasping, a stuttering here and there, a fragile (at times, fraught) domesticity—

The path to happiness is.
Paved with discarded fish a
sacral gill slitting. Plenty of
blowholes in the sea breathe
white in urchin faces as
they scurry to do dishes. Why
whiskers at a wedding is good
luck icing.

To bind is to bosom to bouquet
to bedroom. A field of red poppies
I love you is a garden if you let it

—a desire, rather, many and massive desires—

On the fires escape     I grew like a dandelion

I wanted to be a garden

So I doused myself with hose water

Painted my arms with thorns

In the wandering dusk

How to be a fortress
Tenement of my red mouth

—but also a perseverance—

The stained  glass tree house
I want to live there
A curved path of stone circles
The ruby glass necklace I tried to preserve
The stain.
I try to keep things.

Entonces, one senses complexity, confusion, difficulty … but the speaker perseveres, certainly if only to write these poems.

And it all creates for a moving effect, such that the reader is also moved to wish this person(a) well, because it’s clear that the person(a) is engaged in a deep search from which emanates such ravished but also ravishing lines like

Almost like love fluttering.
Early dark now. I look for you in vestibules.

One of the chapbook’s possibilities that doesn’t exist with full-run, perfect bound books is how it flowers through a custom-made (often combined with DIY) sensibility. Margaret Bashaar’s LETTERS FROM ROOM 27 OF THE GRAND MIDWAY HOTEL -- designed evocatively and sensitively by poet-editor Juliet Cook -- is a grand example of such a production, from the yarn that flows from the spine 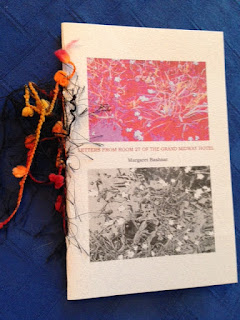 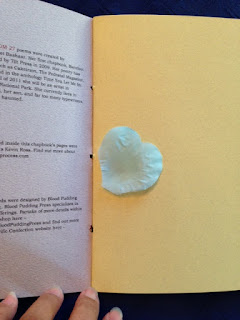 to the loose photographs by Kevin Ross that, within the pages, heighten the tone and text of the poems 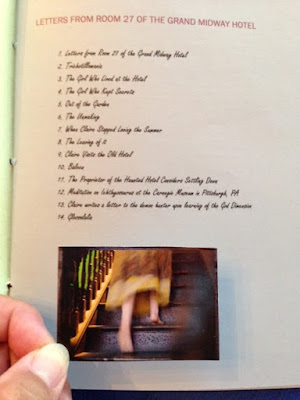 The above photo was inserted atop the Table of Contents—a pair of legs going up a staircase of what I assume—but in any event, can be—the referenced Grand Midway Hotel.   It’s a nice touch: at this point, we haven’t read the poems yet and the ascension up some stairs facilitates the idea of going somewhere.

The poems, themselves, are powerful, disturbing, enchanting, lyrical, punchy—AND they do imply they could have been written by a poet at a desk (or on bed, or while sitting atop a toilet) in a hotel room.  Presented below are shots of the chap’s pages bearing the loose mini or small photographs—as you see, they heighten the mood and intensify the reader’s engagement with the poems.  Beneath each shot, I’ll present some of the poem’s lines so you can see how they relate: 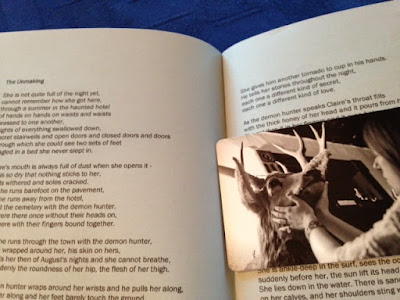 Imagine yourself looking at that photograph while you read the poem "The Unmaking" that begins with these lines:

She is not quite full of the night yet

cannot remember how she got here,

through a summer in the haunted hotel 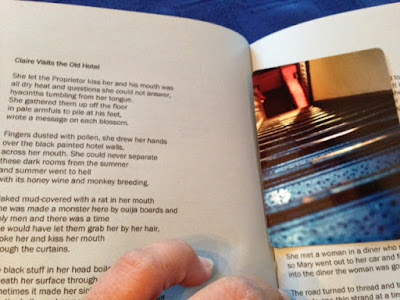 imagine yourself looking at that photograph while you read the poem "Claire Visits the Old Hotel" with this first stanza:

She let the Proprietor kiss her and his mouth was

all dry heat and questions she could not answer,

hyacinths tumbling from her tongue.

She gathered them up off the floor

in pale armfuls to pile at his feet,

wrote a message on each blossom.

More pages later and then there's this image: 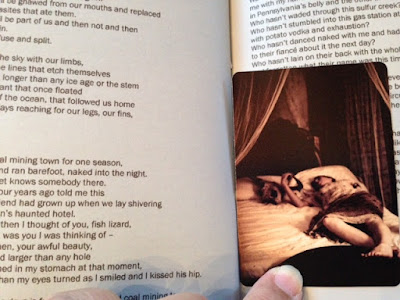 Imagine yourself looking at that photograph while you read the poem "Meditation on Ichthyosaurus at the Carnegie Museum in Pittsburgh, PA, featuring these lines:

Where are you now? Are you there, hands reaching into the night?

are always looking away from me and I will never stop looking toward you toward the thing I have named.

Bashaar's poems are effective and moving because they also often make the reader feel like she's in a dream.  The evocative visuals enhance the poems' resonance.  All in all, Bashaar’s poems and Black Pudding Press’ design combine to offer an intense, highly-satisfying reading and witnessing.