Events this year highlighted the problematics of mere imagination for writing (persona) poems.  (If you don’t know or can’t figure out what I’m talking about, let me not end your “ignorance is bliss” status.)  What’s interesting is that Aaron Apps’  2012 (and debut) poetry collection, COMPOS(T) MENTIS,  may be said to have hearkened this problematics—except that I know “hearkened” is not right in that these problems have long been unfolding: the author has never been dead so why would peeps ignore the role of the body?  And that there are different types of bodies, and certain bodies have histories and conditions specific to them…?

The tactile, geometric surface of our economic world-failure has become unavoidable and implicit in every action that is blind to it. The world-failure is the amniotic fluid in which noise-bodies float. Yet, even in the unavoidable “realism” (the implicitly accepted truth) of the abstract post-industrial wet dream there are democratic bodies that can infect from within, as destabilized tumors, moles and non-functional limbs within the bodies the bodies of the modes and non-functional limbs within the bodies of the world.  The flaccid, slick organs are co-helpless as they hawk up a wad, load, spunk, or splooge—a sea of weak, reforming subjectivities in folding loam. These organ-cocks still glean their sustenance form the cyborg system and its giant chronological movement, but they fail to partake of the same degree in its destructive force. It is a sad, vicious suffering that rips apart viscuous little bodies that soil in its force, that bile to its ruptured organs.

Apps’ book is not designed for safe reading, specifically because the body, rather bodies, are integrated into the reading.  There are texts like

—from “THE FLESHSCAPE FILLS WAILS”

/ or sense and the round tongue flicking soft

Sack coughs as the hole coughs thorugh the rim

As the precedent roots 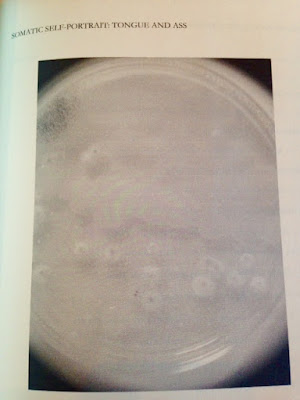 whose caption includes the words “tongue and ass.”   Other captions feature the words “earhole,” “penis tip” and “various flesh folds” even as the images are not clearly figurative—which only makes the result more powerful as Apps shows there is not escape or respite or rest in abstraction because existence entails bodies and bodies, oh yes, are messy.

There are varied ways to glean significance from Apps’ project—as different as each reader’s subjectivity.  My reading today (which no doubt will be different on another day) simply reflects certain events this year.  But this is just to say of this book that was released three years ago: it remains relevant.  And it’s likely to remain relevant for as long as bodies matter.  I guess that’s immortality we are talking about, even if it can be depressing—kudos to Apps for his vision generates words like these; I don’t enjoy reading it, but I respect and admire the power:

Although, surely, the attempt is always a failure. The attempt in the necessary, writhing field of the body-politic. The poem a attack on the self, an attempt to make the self a part of the wider body. The tucking of the self back into its own hole. A fissure. A failure.

Humans: we deserve to be disturbed.