COME IN ALONE by ANSELM BERRIGAN

Oh I inhaled this review copy! There’s so much in Anselm Berrigan’s Come In Alone to admire! It brings to mind that saying about how all poetry is actually visual, but that’s just one of many stepping stones into inhabiting this poetry collection.

But, okay, to start with the visual—this poem that I take to be the so-called “book-length” poem inscribes its lines along the edges of the page, leaving the center of the page to be blank.  Lookit here (click on images to enlarge): 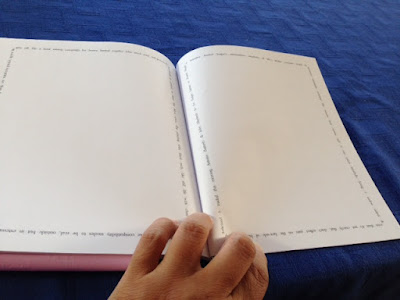 What this means is that when one reads the poem one must turn the book along its sides to continue reading the line(s). Hm: important segue—it just occurred to me as I type this that the poem may not be book-length so much as is simply one long line … for what would constitute a line-break? Each turning of the page? That seems too sloppy unless one believed the publisher’s and/or author’s choice of the book’s 7.5” x 9” size was critical to the writing of the poem…?  Anyway …

… so one must read the poem by turning the book along on its side, then upside down, then on its side again to create a “circle” that picks up on the next page where, once again, one turns the page on its side etc to continue reading.  This is to say, the lines de facto create a spiral path which is what the reader needs to traverse to read.

A spiral. And typically within the spiral is space, just like the blank field that is centered on each of the book’s page.  That blankness, moithinks, is significant. It could be a space for the reader to inhabit—my favored interpretation because that’s how I roll when the matter at hand is a text being read, but also an interpretation encouraged by the line on the book’s first page which seems to be “I” repeated along the page’s four edges. “I I I I …” etc.  Reader inhabitation here, can be more than theoretical—just as a body is floating within the spiral as the spiral travels through outer space (isn’t that an archetypal image for a dream or nightmare?), the book’s space need not remain blank as an intellectual space for a reader’s thoughts but can be filled with something from the reader—another poem or text or drawing or another visual image created by the reader and perhaps inspired by the lines on the page. In that space, marvelous things can happen … and it’s often a poem’s effect, isn’t it, that makes a poem great?

Beyond the spiral, there are the lines or long line making up the poem itself. When there’s a visual dimension to the poem, it’s always interesting (at least to me) to look at the actual words. One would not want the visual element to subsidize, if you will, the quality of the words.  It’s a simple enough check: just look at the words on their own which I shall do here by typing up a random section, to wit:

for ace of pentacles I bottled my so-called strangeness to pour into a wordless wreck affecting known space to get an orange fruit bowl filled version of your approaching the earliest empty donnybrook we hear the fallen but for the fuckers address to whom be blacked out as no as now back around & pls disavow the silt of this here ribald command to overhear for the voices reside: subotica subspace being a flung pal

What you see in the above excerpt is an energy and innate rhyme that make me suspect that, visual elements notwithstanding, the poem would be effective for a public reading.

Having said all that, I could be wrong about the spiral thingie. Perhaps the poem is not a single book-length poem or one long line. Perhaps the poem is a series of page-frames where the frame is the text along the edge of the page. I speculate such because of a few pages like this page (rather, a close-up of this page) 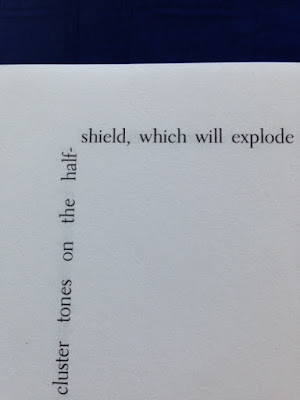 where, as you see on the upper left corner, the left edge line ends with “half-” to be picked up with the beginning of the top edge’s first word, “shield”. In my spiral-based reading, I would have read “half-“ and then picked up my reading with the first word on the subsequent page which is “nowness.” While I like the uncertain notion of "half-nowness," I believe “half-“ is supposed to be followed by “shield,” which means … actually, I don’t know what it means even as I see the effect as facilitating the idea of a closed loop as required by a frame. What I can share is that the words themselves are of the type that they can be moved out of the order(s) in which they’re presented and they still would generate poetry (you know, that Stein thing about placing words chosen at random next to each other and somehow meaning surfaces…)

The last word  of the book/poem (if I read this right) is “center”—how apt, at least for fitting my above read but also, when combined with the first page’s words of “I” emphasize the project’s theme (so to speak) as articulated by the book title: Come In Alone. And, in fact, the reading of this book reminds me of the experience of visiting that famous temple (so famous I can’t remember its name right now) on a hill or mountain in Greece. Where, at the bottom of the mountain, you begin to climb the slope towards the temple but the paths are deliberately designed to meander right then left then right then left et al along the side of the mountain. The design prevents a speedier, more direct, ascent towards the top and such design is deliberate: the idea is that as the visitor walks along the elongated path, the time and focus allows the visitor to leave behind more and more of the world so that by the time the visitor arrives at the top, at the temple, s/he’s been emptied of the world and who’s available to enter the temple is only one’s self.

The physical act of reading the book—the reader not being able to, say, place the book on a book-holder to read but being forced to interact manually through the turning around of the book to continue reading—also emphasizes the role of reader-involvement through no less than the body.

Perhaps the idea then of Come In Alone is to enter the book as a reader only to come out of it seeing yourself or part of yourself.  The poem, after all, can also act as a mirror.  Which is why I don’t bother sharing more about what I think the poem is “about” as that’s just personal to me. What I can share is that the book is generous enough—there’s certainly enough space within—to allow for multiple interpretations by multiple readers (or the same reader picking up the book more than once over time). Oh well okay I’ll share one dimension from my read: there is a socio-political dimension, if only because it seems difficult to avoid politics when words like “America” are inserted.  So what does that mean? That if there is a center (the space framed by the words) it's a center that will not hold (as in be steadfast) because it's subject to multiple interpretations?  The “socio,” I suppose might refer to one’s times, i.e., the

What do we see? How do we pose? What do we ignore (as in the words/matters along the edges or periphery of vision)? … And perhaps even more nuanced questions like, I dunno, how do we matter?

Last but not least, I appreciate the Copyeditor’s Index at the back of the book. Intelligently presented in handwritten form, it presents a copy editor’s notes as s/he, I assume, read through the manuscript: from typos (e.g. “boros, not boroughs”?), checks on definitions, second guesses, questions, et al.  The section is poetry on its own—perhaps all poetry books (that benefited from a copy editor)  should have one? No doubt I, for one, will steal the idea for a future project.

Meanwhile, Anselm Berrigan’s Come In Alone is a highly satisfying read on many levels and I am left with deep gratitude for the experience. As someone who’s read much of his prior books, I can also share that it’s great to see a poet … stretch, then reach far.  As they say, Highly Recommended.
*****