Wow. This was a lovely.  It is so finely done, which is to say: from a finely-attuned observing eye emanated this poem—this stroll—through a city and personal history, and it is just brimming with light, lucidity, intelligence and warmth.  It begins

out the front door morning turning

you must have been a beautiful baby

singing moves the lips the jazz

With those first five lines so much already has occurred with the quickening beginning immediately both in terms of the narrative “out the front door…” and that the line begins in the middle of the page (rather than flush left) as if the poem’s persona was eager to begin the living beyond the front door.

Then there’s the single-word line “hill” that, in reading, makes one pause—thereby making the receptive reader feel/sense the hill and not just read the word—as one has paused, too, at the top of hills and other peaks to catch one’s breath or take in the view…

… and the noted tune of course introduces yet another dimension of song, even as the fifth line intelligently notes “jazz” which, too, may be an adjective for the form of the lines so far—

all so intelligently made!  And the chap-length poem doesn’t disappoint as it moves on, with each passage contributing another layer to defining its title: Passion.  Here are two sample pages; click on the images to enlarge as the experience they present is ravishing: 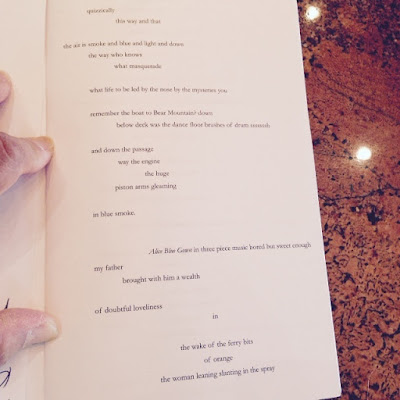 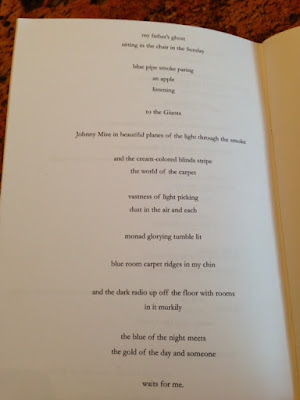 The poem is in seven sections and what is also an unexpected but intelligent choice by the poet was to switch, in the seventh section, to more of the prose paragraph in form.  There is a welcome density here, as if manifesting what’s in the second paragraph in the image below: “That happened there and this happened here. Between is flesh…” 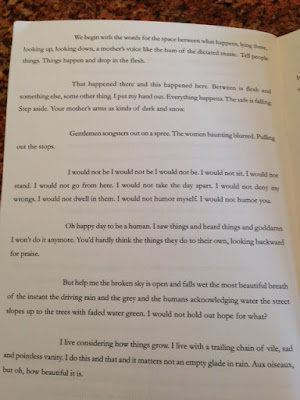 The poem (of course) has a lot of words.  So much words.  But one gets a sense of some deep thinking, rather, laborious thinking before the poet puts a word on the page as the poem offers a sense of having been created from some very intense concentration.  That’s why the poem, in turn, radiates.  It ends like this, with something glittering beyond its maker’s hands, also fittingly beaming: 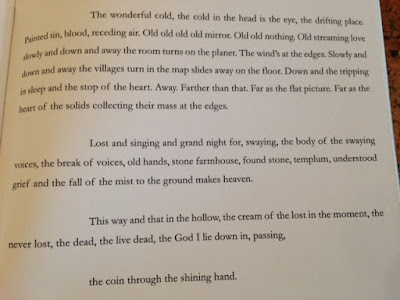