THE BOOK OF THE GREEN MAN by RONALD JOHNSON

The Book of the Green Man by Ronald Johnson
(Uniformbooks, 2015)

1. The green man is a figure from ancient Briton. Leaves grow out of his mouth and head. He appears in medieval Christian churches and in neo-pagan lore. For example: 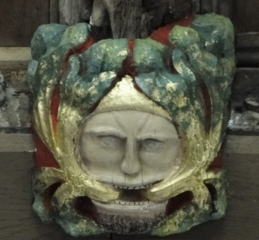 2. The cover The Book of the Green Man is not a representation of the Green Man, but of a radish (an inexplicably green radish) shaped like a hand sprouting leaves at the wrist. Fecundity of the vegetable sort, hybridity. Johnson is famous for his cookbooks. The cookbooks came later but are not unrelated. 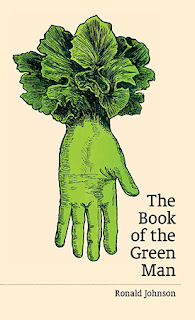 3. The Green Man does not permeate this book. Yet is present. The Book of the Green Man (hereafter abbreviated as Green Man) is organized around the seasons of the year.

4. Green Man came out in 1967 from Norton, while Denise Levertov was Norton’s poetry editor. Overshadowed by Johnson’s later books, it disappeared — it doesn’t even appear on Johnson’s Wikipedia entry. (But it does appear via html in the Light and Dust Anthology of Poetry (Karl Young, curator), along with pages from Johnson’s journal, at http://www.thing.net/~grist/ld/rjohnson/rj-gm-1.htm.) This paperback edition is a reissue from Uniformbooks.

5. Green Man is a young man’s book. For example, the naïve lyrical stance: I am experiencing this, therefore it is important. The instant nostalgia. My first impression was: Wordsworth’s Prelude meets Whitman’s Leaves of Grass. (Yes, I know those are not young men’s books, and hypothesizing The Prelude is an easy call, since it is cited or quoted several times.)

6. There is some truth to this first impression, but it turns out that it’s not so clear what is being experienced. There is serious disruptive technique behind the scenes, exposed in helpful endnotes by Johnson himself. Aside from obvious quotations (usually italicized), entire poems are made substantially from other people’s words. I mentioned this to my husband who leafed through and immediate seized on one poem — Exhibit from Frederik Ruyshc’s Anatomical Museum — surely this was from Johnson’s own experience! No, the notes helpfully tell us that it is from Ruthven Todd’s Tracks in the Snow.

7. Everything is seen through the scrim of other people’s writing. Often obscure writing at that: books on gardening, on native botany, on traveling, on follies (in the architectural sense) and grottoes… Not to mention physically following, with the feet, in the footsteps of predecessors. Ancestry is inescapable.

9. Johnson described the book (quoted by Ross Hair in the Afterword) as an “attempt, as a brash American, to make new the traditional British long seasonal poem.” Which, pace collage and quotation, is all about observation and experience, isn’t it.

10. Green Man is in some sense an attempt to absorb and be absorbed by British and especially literary British culture, yet somehow Kansas seems inescapable. Johnson grew up in Ashland in far south somewhat west Kansas, a town which currently has fewer than 900 inhabitants. (Probably more in Johnson’s time, but probably not by much.) I cannot not think of Kenneth Irby (who grew up in Fort Scott, Kansas). A kind of strange twinship: smalltown Kansas childhoods, liberation at universities elsewhere, emigration to California, inescapable influence of Robert Duncan, eventual return to Kansas. Is it Kansas which shapes their particular kind of elegaic lyricism, rooted in land and history? I began Green Man while Irby was beginning his several months long process of dying, and heard it exclusively in his voice. Writing this I am listening to Johnson via PennSound. The pitch is much lower, the accent less midwestern flat, but the rhythms and emphases, not as marked as Irby’s, are also not that far off: “Siren, transformed to piiiiiig” says Johnson, describing the provenance of a poem.

11. Johnson moved beyond Green Man. See Ark (which I read transfixed in one sitting in a Berkeley coffee shop nearly a couple of decades ago). See Radi Os. See The Shrubberies, which can be seen as a ripening and distillation of the impulse behind Green Man. Full circle, with spiral. I am grateful to Uniformbooks for the reissue.