MEMOS and DOUBLE-EDGED, both by SUSAN TERRIS

I like the weight, the sense, of these poems in Susan Terris’ MEMOS. They are spare, each poem fitting on a 5.5” x 7” page and ranging in length from only two to six couplets each.  But the lengths, in addition to manifesting well the concept as presented by the book title, serve to emphasize the lurking zingers that finally come out in the last lines.  For instance, observe how this poem swerves before its sharp conclusion:

And what I’m calling zingers zing instead of sing because of their singe. But what’s lovely about this collection, too, is the variety of the zingers.  This one is powerful for so being in the world, and evoking so much with its ending:

Memo To The Homeless Woman By The Sutter Stockton Garage

There’s also tons of humor—for example, from “Memo To My House Plants” (which I much appreciated given my brown thumb):

blossom for your keep before others come by

and this other pungent example

Ultimately, the variety of characters addressed by the memos as displayed by the titles which all begin “Memo To…”—here’s the first page of the Table of Contents 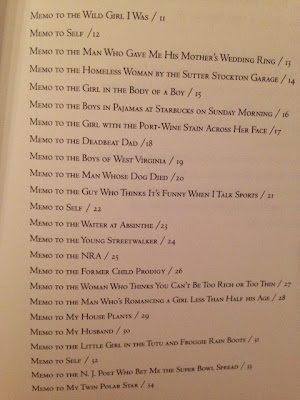 —evince a life well-observed and considered, which is to say, with this collection, Terris acquitted well her job as a poet.


Susan Terris acquitted well her job as a poet, I say above, but then again, such would be the reward of experience as MEMOS is hardly Terris' first rodeo.  She has several books, and the "zing" and "singe" I felt from poems in MEMOS remind me of an earlier chapbook, Double-Edged.  As evoked by the title, the poems offer instances of edgy dualities or sharp-edged facets of a single matter. For example:

Day by day,
first coupled inward,
then looking outward
where nature
might be
redefined,
where honed edges
grow dull
and memory,
a fresh cut,
oozes
if held too tight.

Her poems bear the knowledge of life experience in addition to imagination (not to say that these poems necessarily reflect the poet's biographical experience).  It's what can cause that song to zing.  Here's another example:

Getting out of Dodge

Your detachment, he says, is extraordinary.
He’s speaking as I’m cooking—
salmon, broccoli, potatoes.
He’s sick, he says, but, still, I—
heartless—am leaving town
I should stay to plump pillows, shave
him, make one more midday shake
But, six guns blazing if need be,
I am getting out.
Sometimes, because
Space is curved, you go east to come west.
And sometimes, turning your back is


The only way to save love

Terris shows herself a master at writing poems as sagacious nuggets.