A FIELD GUIDE TO LOST THINGS by PETER JAEGER

A Field Guide to Lost Things by Peter Jaeger
(if p then q classics, Manchester, U.K., 2015)

I was enchanted by this book!

“reconfigures every single image of a natural object in CKS Moncrieff’s 1922 English translation of Marcel Proust’s Swann’s Way—the first three novels of In Search of Lost Time. The guide includes images of nature encountered by Proust’s characters in rural landscapes, cities, towns and parks, as well as in the bodies of other characters.”

However, I thought it would be intriguing to ignore that note and accept—read—the book on face value, that is, consider it solely on what are presented on its pages. (I wanted to read it in this way to avoid having to reference Swann’s Way or the implication that all readers must first be familiar with Swann’s Way in order to have a meaningful engagement with Jaeger’s work.) In this sense, I became enchanted as the book has a clever structure of presenting words in alphabetical order—like an encyclopedia or a dictionary which, after all, are also types of guides.  Now, “lost things” could be many things.  Subject matter and structure combine to allow the poet a huge expanse of possibilities (though perhaps not as expansive as I sense since Jaeger was “constrained” by Proust’s Swann’s Way but oh yeah we’re ignoring that).  And, in fact, Jaeger is up to the book’s expansive potential with entries that charm—e.g.

Bones She would hold out for me to kiss her sad brow, pale and lifeless, on which at this early hour she would not yet have arranged the false hair and through which the bones shone like the point of a crown of thorns. What a lazy-bones!

—that surprise, surprise in that the word or phrase seemingly about to be defined is not presented with a definition (as can be implied by the structure) but often an entry that provokes or elicits a pleasurable curiosity—e.g. the first entry

—that presents a delicious sense of humor, as in this entry that first made me laugh until I realized it could be morbid—e.g.

Astral Body  It was now an astral body.

—all of which gave much delight as I read through the pages.

Notwithstanding the two column-per-page presentation the enhances the impression of the book being a guide, some of the “lost objects” also manage to give Jaeger the excuse to wax long into an actual essay or short story.  Here’s a visual of “Brain” (click on image to enlarge): 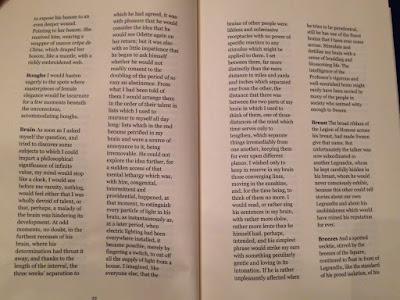 Nor does the author play loose with the presented theme of “lost objects”—you might glean by now that I’m responding to “lost” as its literal meaning rather than that it was part of the title of Proust’s work. Part of what makes this work effective is how Jaeger reconfigures the entries to justify their inclusion in the guide.  For example, “apricot” which doesn’t innately conjure something lost comes to belong through its entry:

Apricots  Apricots, because they were still hard to get

Blue Eyes “I’ll leave you in peace now, I know when I’m not wanted,” she ended discreetly and left Swann with the girl with blue eyes.

While both "Apricots" and "Blue Eyes" discernibly relate to Proust's work, another reason I wanted to look at this project without nodding much to Proust is that Jaeger's structure can be a template for other and others' new poetry collections--the idea of offering a "field guide" or "guide" to some topic and whose entries then go beyond dictionary and technical definitions, i.e. poetry.

Jaeger's entries on their own are effective, for instance the evocativeness of “Blue Eyes”—proof that Jaeger’s reconfigurations make the result, too, to be his own.

Throughout, I discerned a relish from the author—that he was enjoying, indeed, savoring the exercises that came to make up his book. It’s a sense that befits the underlying inspiration which I will now acknowledge by sharing one of  the book’s epigraphs:

With a passion unknown to any writer before him, Proust took as his subject the fidelity of things that have crossed our path in life. Fidelity to an afternoon, to a tree, to a spot of sun on the carpet …
—Walter Benjamin

Let me end with this clever entry, by Jaeger:

Mouthful I drink a second mouthful, in which I find nothing more than in the first, a third, which gives me rather less than the second.

My gratitude to Peter Jaeger for a wonderful reading experience!


Eileen Tabios does not let her books be reviewed by Galatea Resurrects because she's its editor (the exception would be books that focus on other poets as well).  She is pleased, though, to point you elsewhere to recent reviews of her work.  I FORGOT LIGHT BURNS received a review by Zvi A. Sesling at Boston Area Small Press & Poetry Scene; by Amazon Hall of Fame reviewer Grady Harp over HERE; and by Allen Bramhall in Tributary.  Her experimental biography AGAINST MISANTHROPY: A LIFE IN POETRY received a review by Tom Hibbard in The Halo-Halo Review, Allen Bramhall in Mandala Web and Chris Mansel in The Daily Art Source. SUN STIGMATA also received a review by Edric Mesmer at Yellow Field.  Recent releases are the e-chap DUENDE IN THE ALLEYS as well as INVENT(ST)ORY which is her second “Selected Poems" project; while her first Selected THE THORN ROSARY was focused on the prose poem form, INVEN(ST)ORY focuses on the list or catalog poem form.  A key poem in INVENT(ST)ORY was reviewed by John Bloomberg-Rissman in The Halo-Halo Review, and the book itself was reviewed by Chris Mansel in The Daily Art Source and Allen Bramhall in Mandala Web.  More information at http://eileenrtabios.com