Issue No. 25: TABLE OF CONTENTS

[N.B. You can scroll down on blog or click on highlighted titles or names to go directly to the referenced article.]

Burt Kimmelman reviews The Magnificence of Ruin by Sherry Kearns

Neil Leadbeater reviews In The Weaver’s Valley and Fragile Replacements, both by William Allegrezza

Eileen Tabios engages The Gospel According to Judas by Keith Holyoak

Monica Manolachi reviews Look Back, Look Ahead by Srečko Kosovel, Trans. from the Slovene by Ana Jeinikar and Barbara Siegel Carlson

Eileen Tabios engages MAO'S PEARS by Kenny Tanemura; A Green River in Spring: Poems by Matthew Thorburn; PIGTAIL DUTY by Melissa Eleftherion; and LETTERS FROM ROOM 27 OF THE GRAND MIDWAYHOTEL by Margaret Bashaar

Genevieve Kaplan reviews Fiddle is Flood by Lauren Gordon; a gunless tea by Marco Giovenale; The Goddess can be Recognized by her Step by Sarah Mangold; Tracks by Logan Ryan Smith

Eileen Tabios engages I Live in a Hut by S.E. Smith

Eileen Tabios engages There Are Words by Burt Kimmelman

richard lopez Reviews All Hat, No Cattle by lars palm

Michael Boughn reviews I Once Met by Kent Johnson

Eileen Tabios engages FLUTES AND TOMATOES: A MEMOIR WITH POEMS and The Color Symphonies, both by Wade Stevenson

Eileen Tabios engages Others Will Enter the Gates: Immigrant Poets on Poetry, Influences, and Writing in America, Edited by Abayomi Animashaun with Introduction by Kazim Ali

Edric Mesmer engages The True Keeps Calm Biding Its Story and After Urgency, both by Rusty Morrison

Eileen Tabios engages SMILES OF THE UNSTOPPABLE by Jason Bredle

Posted by EILEEN at 1:33 PM No comments:

Thanks as ever to Galatea Resurrects' generous volunteer staff of reviewers. In addition to presenting wonderful feature articles, we feature 80 NEW POETRY REVIEWS in this issue.

Our offerings this issue includes a new feature: a self-review! I was publicly musing (on Facebook) whether it is possible for an author to review one’s own book without degenerating into comedy, self-deprecation or “Boom. Pop. Wow!”  Allen Bramhall offers one manner by reviewing his own DAYS POEM, Vols. 1 and 2! I thank him for being a good sport, and welcome other authors attempting this exercise for future issues!

With Issue No. 25, GR has provided 1,579 new reviews (including the Self-Review) and 129 reprinted reviews (the latter brings online reviews previously available only viz print or first published in now-defunct online sites). With this issue, we also increased our coverage of poetry publishers by 15 to 559 publishers in 17 countries. This is important as much of the ground-breaking poetry work is published by independent and/or relatively small presses who (by the nature of their work) are not always as well-known as they deserve.

Poetry has enhanced my love of lists (have I mentioned my Selected List Poem book?) so here are GR's latest poetry-lovin' stats!

I continue to encourage authors/publishers to send in your projects for potential review—note that because we believe in Poetry's immortality, GR does not limit reviews to just "recent" poetry publications. And, obviously, people are following up with your review copies (see below)! Information for submissions and available review copies HERE. Future reviewers also should note that the next review submission deadline is June 30, 2016.

Of reviewed publications, the following were generated from review copies sent to GR:

The beauty of Blogger is how typos can be corrected at any point in time.  If you see any typos, feel free to let me know as I can still correct them even after the issue's release.

I hope you enjoy this issue of Galatea Resurrects!

P.S.  And of course: HAPPY HOLIDAYS from all of us at Galatea! 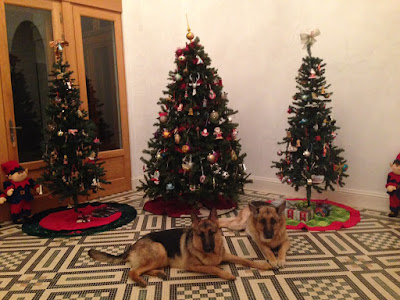 Posted by EILEEN at 8:35 AM No comments:

MY CHOCOLATE SARCOPHAGUS by CLAUDIA CARLSON

Claudia Carlson was born in Bloomington, Indiana and has lived in Manhattan since the age of 22. She majored in English and Art History at SUNY Stony Brook and most of her working career has been spent as a graphic artist designing book covers and interiors in publishing houses. She is married to the playwright and lyricist James Racheff. Both her daughters, Natalie and Caitlin, are involved in the arts.
Her first volume of poetry, The Elephant House, was published by Marsh Hawk Press in 2007. This was followed in 2013 by a photo / poetry book called Pocket Park. Both books were well-received.
The present collection comprises 22 poems plus a sequence of five poems dedicated to a close friend and fellow writer. All of these poems are of an intensely personal nature written during a time of hospitalisation when undergoing palliative care for terminal cancer. They are brave poems from a poet who is not afraid to express her emotions. One of the many strengths of this collection is that the poems look outward rather than inward – they are poems that are addressed to family and friends and the outside world. The dedication says as much. The poems in this collection are remarkably calm and life-affirming. Some of them are even humorous. All of them are beautiful in their own engaging way.
The title juxtaposes chocolate with death. It is as if death is something that melts in our mouths –and, as a title, it is undeniably original. Some hold that death is life’s greatest adventure, the soft-centre of bliss. Carlson certainly softens the edges with this unique take. Her hope is that we all go out in style. Love is all that matters in the end. The first poem in the collection, "Wellspring," picks up on this point. It comes from the rich and bountiful source that informs all of her writing:

I am giving things away
Love mostly
---
It feels so good
My heart does not empty.

Inevitably there are poems in this volume which are set in the context of cancer and of medical care. Titles such as "First MRI," "2nd Brain MRI" and "Random Abdominal Tumours" speak for themselves but even here, Carlson eschews positive thinking. Undergoing magnetic resonance imaging, she closes her eyes and summons up a swarm of bees. She hears

stillness in the roar
the hum is louder than you think...
I watch the bees pulse in and out of clover
it could be summer again
I could be well.

The poem "Hospitality" is also skewed towards the positive. As the title suggests, it is a poem that is more about engaging with other people than it is about the place where it is written. The entrance to the hospital is described as "The Porch at the End of the World." Porches are thresholds to another place. They are also signifiers for the Stoic School of Philosophy (from the painted porch in the Agora of Athens, where Zeno taught). The image ties in neatly with the author’s own stoic attitude towards her situation. She makes reference to the other people who are described as "guests" (not patients) and of how they all "discuss sunsets with authority" when they are "hale enough to rise and see them." She may long to feel the air outside but she can still appreciate the beauty of a sunset.
In "The Body Takes the Soul for a Walk," Carlson shows us how a shaft of sunlight across the floor gives her a sudden awareness of the cycle of the seasons and how much they mean to all of us. "I need another spring," she writes, "I need another spring." There is sunlight in the next poem, too, which is, for me, one of the most beautiful poems in the book. This is the poem called "Venus on the Hudson" – a wonderful evocation of innocence and experience when she looks back to her 17-year old self

running tenderly on the pliant grass and thrusting roots
hiding finding in the shadows my lover, my self
flinging ourselves in the light we forget everything
but our incandescence
in the field behind the school
years later I found we had an audience.
I can’t be embarrassed.
It wasn’t me but the spirit of summer.

Remembering the good times is life-affirming. In "Fuck Cancer 2," she tells us that her distractions are "novels, chocolates, wine, flirtations..." and who would argue for one moment with that? Forced at times to confront her condition, she stoically states in language that is  plain and powerful:

The body goes on as well as it can
until it can’t.

The line-break, coming where it does, changes everything.
The sequence of five poems addressed to her close friend Deborah is very moving and speaks of the regret that "life is so short. Was I insufferable?" she asks at one point, and then adds:

I try to be sincere, dying demands it.

There is humour in this collection, too. In "Pickup," Carlson gives us an amusing account of her mother’s foreign cars which were "prone to metal fatigue." On such occasions, when the

little car would bang or choke and go slow
and slower still... we’d coast to the curb
of human kindness.

Carlson plays cat and mouse with her readers over the title here; is the poem about pick up trucks or pickups? Writing this poem at this particular time, is there not also an unspoken analogy about the failings of the human body?

"Agony Aunt’s Toolkit for Young Women" is another poem that is full of robust humour. It‘s a kind of self-help kit for her daughter Caitlin "for tinkering with common assholery." The poem titled "Living It" is equally amusing and written for her other daughter, Natalie.

In "Sweet Dreams," Carslon once more accentuates the positive. It is poems like this that make the collection a real winner.

...I believe in fall afternoons.
The yellows of the leaves are lemons
Against the blue and gray tablecloth of sky.
How lucky I am despite weakening.

In closing, I would like to return to the Deborah poems and to these two lines in particular:
We each bring all our possibles
To the last hour.
This is exactly what Carlson has done with this book of poems. They are a last-flowering of something beautiful from someone who clearly has so much to say about LIFE. A thoughtful parting gift to family, friends and readers. May you go gently into that good night.

*****
Neil Leadbeater is an editor, author, essayist and critic living in Edinburgh, Scotland. His short stories, articles and poems have been published widely in anthologies and journals both at home and abroad. His most recent books are Librettos for the Black Madonna (White Adder Press, Scotland, 2011); The Worcester Fragments (Original Plus Press, England, 2013); The Loveliest Vein of Our Lives (Poetry Space, England, 2014) and The Fragility of Moths (Bibliotheca Universalis, Romania, 2014).